Seize Smolensk with the overwhelming panzer divisions. Or lead the Russian divisions in a desperate fight for the mother land . Whichever side you choose the ensuing combat will be fierce. Smolensk `41 covers Army Group Center`s offensive in the summer of 1941 to seize the crucial city of Smolensk, the historic gateway to Moscow. This operational level game will draw you in with its beautiful graphics and excellent game play . Smolensk `41 features 1 km hexes, 2 hour Turns, with a map measuring over 300 hexes by 200 hexes.?Over 1500 battalion sized units represent PanzerGruppes Guderian and Hoth, the supporting Infantry Divisions of Army Group Center, and the massive Forces of the Soviet Western Front.?Nineteen Scenarios are included. And if that isn’t enough for you the game comes with a full-featured scenario editor , and order of battle editor.
​ 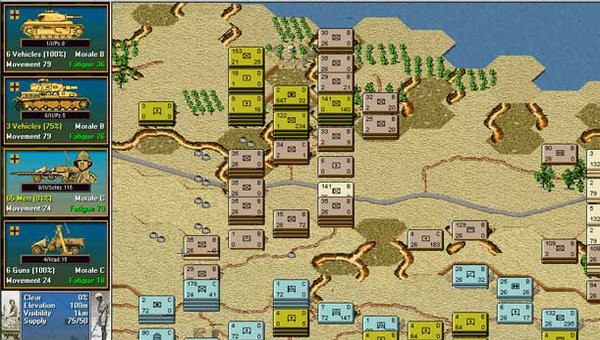