In Dark Reign 2`s apocalyptic future, an ecologically unstable EARTH has Fallen under the rule of a repressive world police force called the Jovian Detention Authority. Charged with protecting the elite`s exclusive "dome" cities, the JDA is locked in to an ongoing battle in which they are trying to pacify the masses of urban "Sprawlers," or those people who dwell in the toxic, irradiated world outside of the cities. It is not until the occurrence of a single catastrophic event, however, that the Sprawlers unite and gather together their unconventional technologies and weaponry to engage the JDA in the violent drama of Earth`s final chapter. The battle unfolds on land, at sea, and in the air. Gamers can take up the cause of either side, fighting through 20 challenging day and night missions. Dark Reign 2`s most promising feature is its graphics, which are indeed quite cool. Set in a full 3D world, the game engine allows for some very neat explosions and nicely defined units. Dynamic lighting and varying weather work together to Create lush, vibrant environments. The camera can be moved just about anywhere, from the useful slightly above and behind view to the useless but gorgeous zooms. However, the camera control is not nearly as intuitive or easy to use as the one in Ground Control, and occasionally you`ll get frustrated trying to get the right view for the situation. But eventually you`ll get the hang of it.
​ 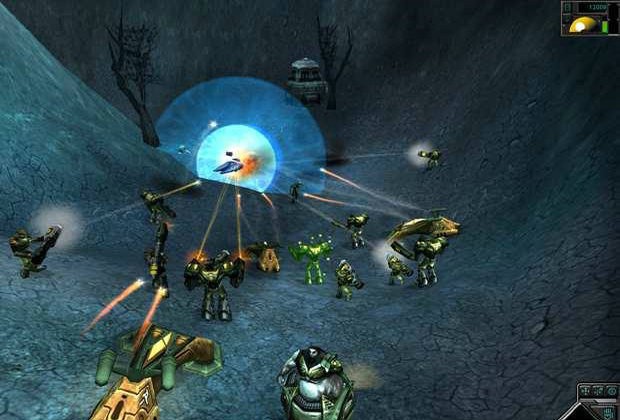