EditBy: puzzle game similar to Tetris, Dr. Mario features Nintendo mascot Mario as a doctor. Play consists of dropping two-sided vitamin capsules into an eight-block-by-16-block playing field populated by viruses of three colors (red, yellow, and blue).There are six types of capsules, differentiated by their color: red-red, yellow-yellow, blue-blue, red-blue, red-yellow, and blue-yellow. The player must rotate and position these capsules on top of and alongside the viruses and other capsules in an effort to eliminate the viruses. Both viruses and capsules are eliminated when four or more objects of corresponding color are placed in a row or column. A player completes a level by eliminating all viruses on the playing field. Conversely, the game will end if any capsules obstruct the bottle`s narrow neck at the top row of the field. The game consists of 21 distinct levels, whose starting virus counts range from four at level 0 to 84 at levels 20 and higher. Above level 20, each level starts with 84 viruses. Levels do not increase in difficulty past level 20. The last level in the game is 24; once 24 is defeated, the game does not end, but rather starts a new round of 84 viruses labeled again as level 24. Much like Tetris, the player may choose a level of difficulty to start, along with the game`s speed and a selection of background music. Three levels of speed can be chosen: low, medium and high. Choosing the low option will make the game`s background dark green, choosing the medium option will make the game`s background blue, and choosing the high option will make the game`s background gray. Three kinds of music can be chosen: fever, chill and off (no music).
​ 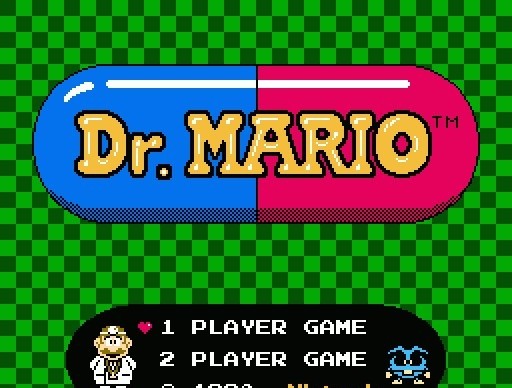 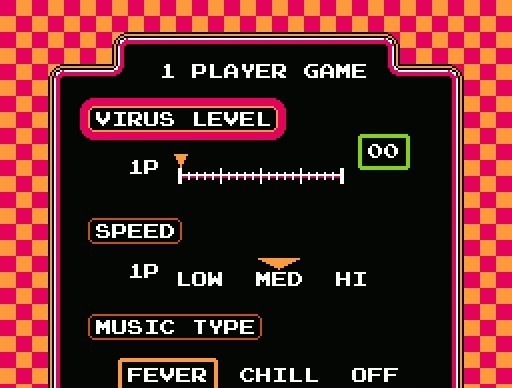 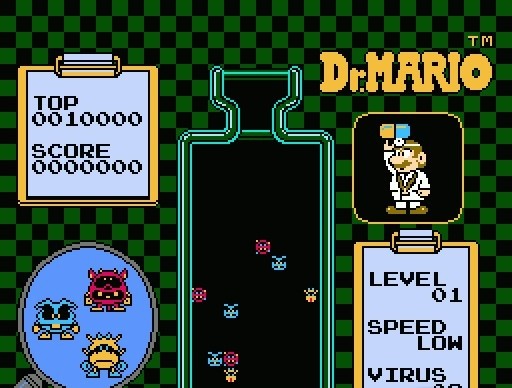