Matrix Sudoku is a popular and Brain-Training puzzle , that consisting of a Grid of 9 by 9 numbers. Each grid number is in the range 1-9 which can only occur once in any row/column combination and the 3x3 square in which it resides. (`Sudoku` is a Japanese word that meaning "the numbers must be single", or "the numbers must occur only once". ) The goal of Sudoku is to fill all the blank squares in the grid with the correct numbers. In Matrix Sudoku, you can save /load games and print the puzzle. Matrix Sudoku also support the variant sudoku: Nonomino Sudoku, also known as geometric Sudoku. This variation most closely approximates regular Sudoku, but instead of nine 3x3 groups, it has nine groups in irregular nonomino shapes. Features: -Millions of different possible puzzles. -Three difficulty levels from easy to hard. -Check correctness as you go along. -Hints available when you get stuck. -Print out the puzzle so you can play your sudoku on pager. -Automark the empty places, in this way showing you the possible solutions for a square. -Variants:Nonomino Sudoku, also known as geometric Sudoku also included.
​ 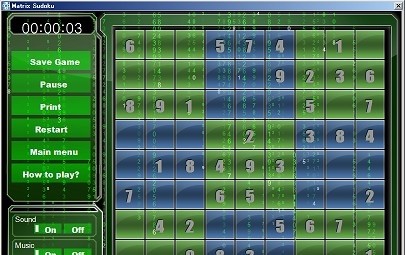 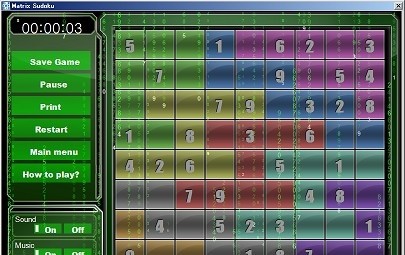