Editor: The same license irrelevance holds true of the bikes, which are very loosely based on the real-life Suzuki GSX-R600 and GSX-R750. Unlike reality, from the very first race of the game you can hit speeds of nearly 300mph, and you also get a limited turbo boost that sends you rocketing down the track in an utterly implausible but fun fashion. The game`s physics are implausible all around, actually. If you hit a slight bump, your bike will launch into the air, fly extreme distances, and GeneRally land perfectly. You can make incredibly sharp Turns without having to worry about the bike sliding out from under you. Crash physics are often unpredictable: sometimes you can hit a wall or ride a few feet up the side of a rocky hill without any problems, while other mistakes will send you flying off your bike. None of the subtleties of real motorcycle racing are depicted in SAER: you never have to worry about balancing the bike, properly slowing for and leaning into turns, slipstreaming other riders and so forth. Then again, the action is blazingly fast and can be fun, at least in short bursts. In addition to selecting automatic or manual transmission, the handling of each bike can be modified, but only in a simplistic way. There aren`t any detailed settings for steering geometry, suspension, gear ratios, and the like. However, you can alter power, steering, and braking; an increase in one will typically lower another. You`ll most likely want to increase power at the expense of steering, since there`s no controller sensitivity slider, and the bikes` default steering is very twitchy.
​ 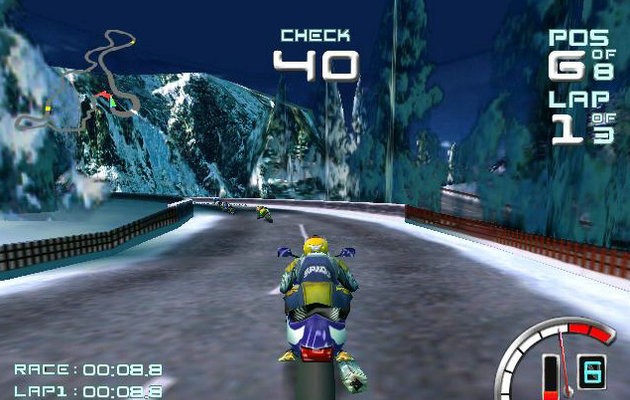