For what it`s worth, Maximum Pool, with it`s online play and easy interface, is a solid Dreamcast pool game.With a name like Maximum Pool, you`d expect Sierra`s Dreamcast pool game to contain an awful lot of pool. But the name Maximum Pool is a bit of false advertising. While Maximum Pool definitely packs in a lot of pool, it by no means contains the maximum amount of pool. Instead, Maximum Pool is a standard pool game with overly simplified control and fewer game modes than most other pool games on the market. Maximum Pool`s only saving grace is its online play. Maximum Pool contains only a few different modes. You can play exhibition, practice, and online games. A quickstart mode lets you pick up with the same game type and opponents as the preceding game. Picking exhibition lets you play several pool variants, such as Straight pool, eight ball, nine ball, and cutthroat, with either human or computer opponents. There are five opponents to choose from, but the only major difference Between the opponents is what faces pop up between shots to give you encouragement. Amy seems unsure of her ability, but she loves the game. Brad says nice shot, but he does so while gulping uneasily, as if losing would seal his fate. Buddy... well, Buddy is a dog. He barks at you between shots. Beating the computer opponents on the different difficulty settings can unlock other, more obscure games, such as 24 cents, a game played on an oddly shaped table.
​ 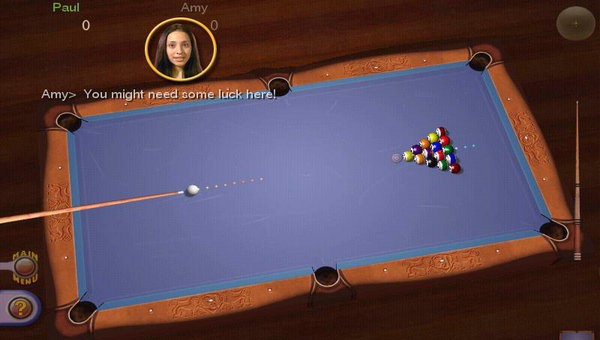