In Seven Kingdoms II: The Fryhtan Wars you can take charge of one of 12 ancient kingdoms or you can give your darker side free reign and play as the leader of a Fryhtan horde. Seven Kingdoms II gives you heroes, 3D rolling terrain, a random campaign generator, a large number of fighting units and weapons, more buildings than you will know what to do with, expanded espionage and research capabilities, and numerous other new features. When the player starts a new campaign, a random world will be created. Fryhtans and humans will be take their places on the stage. Elements of role playing and strategy will be randomly generated and interwoven together to form the plot of the campaign. Every campaign will be unique and no two gaming experiences will be the same.
​ 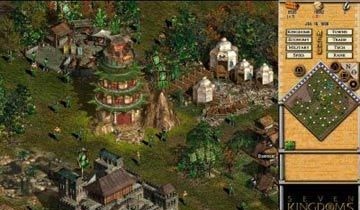