Disciples 2 - Rise of the Elves

Description - Disciples 2 - Rise of the Elves


Rise of the Elves is a milestone in the Disciples universe. For the first time Disciples fans will be able to play as the elder Elven race as they struggle to reclaim their forests from the four primary Forces in Nevendaar. Driven by an unpredictable god who urges them to battle the Elves begin a massive march towards their fate. The noble Elves rule their people from elaborate fortresses within the trees. They adorn themselves with ornate armor and prefer councils or negotiations to conflict. Their Queen is a just leader preferring the path of peace for her kind. The noble Elves owe much to the Empire... The wild Elves have become forest predators. Their intolerance of the civilized world has reached new extremes and they have reduced themselves to highwaymen and bandits. They tolerate the noble bloodline but do not respect it. The thought of their race allying with another is appalling.
​ 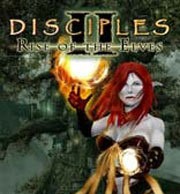