WordZap(R) 6.85 is a Shareware word game where you race your computer opponent to Create the most unique words from a given set of letters. When opponents make the same word, it is Zapped from both lists. As you get better at WordZap, your computer opponent becomes cleverer to match your ability. In this version you can input words using either the keyboard or your mouse. Now, if you are a touch typist you can seriously speed up your play. If you are not yet a touch typist, playing WordZap is a good way to get some practice. We hope this new version will be useful in schools and anywhere people are learning to keyboard.WordZap has beautiful new graphics and a variety of additional `motifs`. Four game options are available: EasyZap, LongZap, WordZap and MatchZap, increasing in difficulty. A variation called "Sudden Death" makes for even more exciting game play. Extra word lists will satisfy the most exacting Scrabble players. Instant definitions are given for obscure words and longer definitions are immediately available online. You can play with words up to seven letters in ten languages (English, French, German, Swedish, Norwegian, Danish, Dutch, Italian, Spanish, and Portuguese). Two human opponents can play each other over the Internet or over a LAN. WordZap`s chat Box helps you make new friends while you play. There is an online community of players who compete on a Ladder. If you like Boggle or Scrabble you will LOVE WordZap.
​ 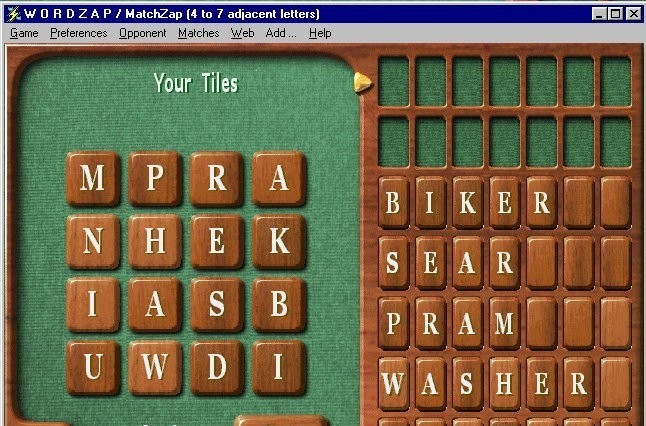