Space Wars is like a modern version of a space invader game. It is a space combat game. Space Wars is inspired by Space Invaders. Space Invaders is a space combat arcade game and was designed and programmed by Toshihiro Nishikado for Taito, Japan in 1978 and remains one of the most popular space combat arcade games ever made. Space Invaders was originally going to be called something completely different as the space aliens were originally Soldiers which you had to shoot down. They decided that it was politically unwise to encourage killing humans so changed the people into space combat aliens. Not many people know that Mr Nishikado, who wrote the original Space Invader arcade game, actually based it on a real occurrence in 1977. It was Christmas Eve and what happened was a load of Japanese school kids, sitting waiting for Santa to appear in the sky above Hokkaido, saw row upon row of aliens advancing slowly from Venus just like a space combat game. The clever kids realized the space war threat to EARTH and quickly cobbled together a laser Blaster from the hubcap, spark-plugs and battery of a parked car as if they were playing a free arcade game. They moved left and right, blasting space combat game aliens out of the sky. After about four waves, the aliens gave up in this space combat game and the Earth was saved. The next morning (Christmas Day) the kids were rewarded with extra presents and figgy pudding. This is based on a dream the space invaders game programmer had. The space combat game was licensed from Taito by Midway for production in the US. In 1980, the space invader game was licensed by Atari for the 2600 game system and was the first arcade game ever adapted for Atari`s home system. # 16 unique levels of space combat. # Over 10 different types of enemies. # 7 types of space ship power-ups. # Beautifully rendered 3D cut scenes.
​ 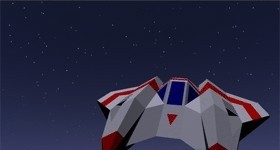