: Ultimate Pool is the most physically realistic pool simulation game available for your computer. The balls, pool table, and cues are all scaled versions of their real-world counterparts, and the balls roll and collide just as they would on a Real Pool table. And best of all, Ultimate Pool features an elegant and intuitive user interface, making it easy and a lot of fun to play.Ultimate Pool includes all of these great games: * Stripes & Solids. A game with simple rules that enables you to start playing immediately and introduces Ultimate Pool`s simple controls and elegant user interface. * 8-ball. The game most familiar to casual pool players. Both a house version with more relaxed rules and the official Billiard Congress of America (BCA) Tournament version are available. * 9-ball. A fun and fast-paced pool game that you will probably enjoy playing again and again. A more casual house version of 9-ball is included in addition to the official tournament version. * 14.1 continuous. This is the game that real pool players play and it is an outstanding test of your overall pool skills. A shorter and simpler house version (50 points) is included, as is a longer tournament version (150 points). * Cutthroat. This casual barroom game is quick to play and involves three players instead of the usual two. * Rotation. This very challenging game is a good test of a player`s ability to set up position for subsequent shots using Ultimate Pool`s English/Spin Control. * 41. This is a fast and fun game that pits two players against each other as they both try to be the first to reach 41 points. With six computer opponents ranging from absolute beginner to professional, amateurs and competetive players alike should find the game challenging and fun to play.
​ 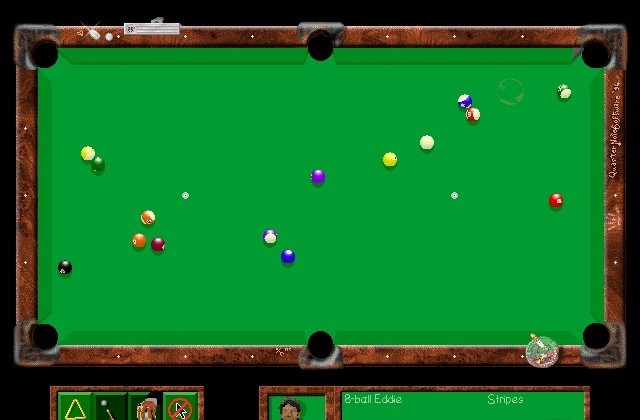