EditBy: On the one hand, Cruise Ship Captain is a computer simulator and a learning tool allowing you to explore how a Captain or Harbor Pilot can maneuver a major cruise ship weighing thousands of tons. You are given a bridge window that controls twin engines, thrusters and steering mechanisms. Your challenge is to bring the ship to the dock in the harbor of your choice. A tutorial mode can help beginners to understand the control of a major ship. A second window attached to the Bridge controls the simulation environment including the simulation speed (1 to 20 times normal), image zoom, wind speed and wind direction. You can try two different ships: the Standard Cruise Ship has a traditional propulsion system with two shaft-mounted propellers each with its own rudder. The second "Pod-Driven Ship" is a more modern ship that lacks rudders, but has two propellers mounted on rotating or azimuthing pods or "azipods" that can rotate 360 degrees and serve to both propel and steer the ship. On the other hand, Cruise Ship Captain is a game that encourages you to compete with others or yourself on how skilfully and how quickly you can bring your ship into the harbor. After mastering the introductory level of difficulty you can increase the challenge by requesting variable wind speeds up to 100 knots, shipping traffic to avoid and even random equipment failure. A special version of Cruise Ship Captain called Cruise Ship time Trials is included in the package. It differs from Cruise Ship Captain in having a count-down timer. You set the amount of time allowed the player, 5, 10 or 15 min, and the game halts after his or her time is up. When it halts it displays a score comprising penalties for any collision damage or help requested from the crew, how far the player was from the dock when time ran out or, if docked, the amount of time it took to dock. Both versions allow each Captain to automatically log their best run for each ship into each harbor.
​ 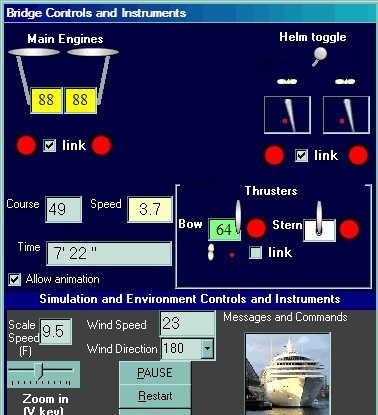 More by Windward Technology of Hawaii