Sudo gives you the possibility to solve Sudoku puzzles on your computer.You can gererate endless number of sudoku puzzels with Sudo, Sudo even checks so you do`t have to solve the same puzzle twice. When you have generated a puzzel you can print it, or Create a sudo game for your friends to solve, Sudo Sudoku can generate a standalone game that has the generated Sudoku puzzle inside it. So you just have to email your friend one file. You might need to zip the file to avoid that your file is removed, some email systems or administrators that don`t like when people emails executable files to eachother. And I don`t blame them, I don`t like that either.If You are stuck you can use the function Give me a hint to get a solution for one of the empty spaces.But one thing that you can do with sudo is to check if one square is correctly entered, so ok sudo Sudoku will help you to solve check if you solved the Sudoku puzzle.Sudo have three diffrent levels easy, medium and hard when you generate a puzzle.The possibility to change Between English,German,Spanish and Swedish language in the program.
​ 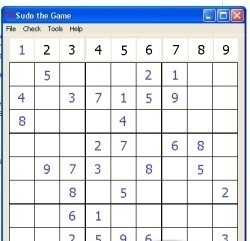